Today I conducted an experiment testing the effect circular leg movement has on the heart. Heart as in one’s emotions, not the vital blood pump.

I posed to myself the following questions:

The film in question is Alexander Sokurov’s Mother and Son. The box has on it glowing blurbs from artists of repute. Nick Cave “wept from start to finish.” Susan Sontag said, “Sokurov is what cinema can be at its greatest.” 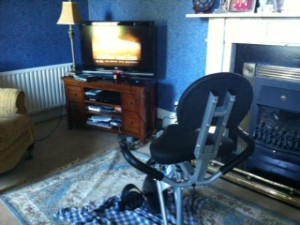 Recumbent exercise bike and menu screen for the Russian film, Mother and Son

It appears you can subtly ridicule people by quoting blurbs attributed to them, presumably because blurbs themselves are ridiculous. Blurbs sound as ridiculous as advertisement taglines do to bemused solitary stoners watching late night television. “Your potential. Our passion”. Shake your head and giggle into the great empty void, poor bemused stoner.

I wish I were the subject of a blurb, having said all that. It would puff me up.

Anyway, how was the film? Did I weep too? (More subtle ridiculing.)

I pressed play and began to pedal, not quite in that smooth order. 3 minutes into the film, I begun to feel antsy. I was too aware of being part of my experiment. Instead of focussing on the plaintive exchanges between mother and son, I began considering how I would go about wording my findings in blog form. I forgot completely the contents of a conversation that ended 15 seconds earlier. Also, one of the pedals wasn’t screwed in properly.

Was I treating the film with appropriate respect? If not, what was causing this lack of respect? Sneering anglophonic arrogance? A brash riposte to how certain anglophones automatically sanctify foreign language films and dismiss contemporary Hollywood films (the same people who you can just tell are not as moved by classical music as they claim. Ok I can appreciate you being moved by that Puccini aria — everyone is deeply moved by that — but that dull, meandering, amelodic 2 hour thing? I just don’t buy your ennobled spirit, your pounding heart. Then again, what right have I — a middlebrow idiot—to doubt your integrity)? A strange desire to shed a few ounces that renders all art irrelevant? Either way, I wasn’t taking this acclaimed Russian film on its merits, as my hero and mentor, John Giles, might say.

I continued to pedal but I wasn’t enjoying myself. I wanted to lie down and play Solitaire Chess on my phone. I started to question my ability to be moved at all. Am I emotionally barren? I became angry at Nick Cave. How come Nick Cave is so deep and I am not? Why have I not the same capacity to be moved? Is it that I am but a butler, he a cave? To wit, he is deep; I am a servant… a servant to shallowness! Is it that which makes me the inferior artist? Or is it that he possesses the brooding good looks of a young Peter Collins of RTE Sport? Or is it the art itself? Is it my art that is shallow? My only knowledge of Nick Cave is “Into My Arms” and that quote on Shane MacGowan’s HMV Influences poster. I hate those posters.

I shall undermine and ridicule you with blurb-quoting and feigned ignorance of your works, Cave. I may not be deep like a cave, Nick, but I am petty, like Tom.

But I am not — I am not petty; I am not a middlebrow idiot; I am not emotionally barren. I cried during the scene in The Straight Story where Alvin tells the story of Rose and her children. It was devastating and I wept like a true deep cave. Perhaps it is harder to empathise with a foreign tongue. But I hadn’t even allowed myself to empathise here. I was not giving this Sokurov feature a chance.

I abandoned the bike and lay down on the sofa adjacent. Perhaps the film requires of its viewer a state of restfulness to match its own. It is a slow, restful film; I would rest on the sofa. Resting my head upon two stacked cushions, I also rested the dorsum of my right hand on my forehead as would a swooning maiden. I needed to rest as many things as possible. I rested my right ankle on my lower left shin. I was now full of rest or “restful”.

It quickly became apparent this restful posture was the optimum posture from which to enjoy Mother and Son. Though the film is a little too remote and plotless to have me weeping like my nemesis, Cave, I found it beautiful nevertheless. And all I needed to do was to lie down. The ordeal on the bike receded from memory amid the rolling hills and lonesome winds of a bleak Russian countryside. I was overcome by a sort of blissful drowsiness. The mother and son could say what they liked, it was all about those long, wordless, static shots. I could have watched them forever. I felt no boredom. Or maybe it just felt nice to lie down, safe in the knowledge that should I ever be asked have I seen an Alexander Sokurov film, I will now be able to say I have. 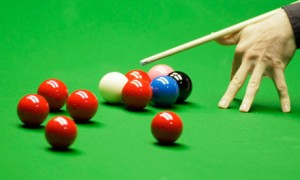 When in my early teens, my learned cousin would recommend highbrow European films to me. He would always go on about how they contained “symbols”. I recall watching these films and wondering, “What symbols? What are symbols?” That said, I could at least appreciate the cinematography. Those misty Russian landscapes are so unworldly, so beautiful — very restful! I am a sophisticated teen. I play snooker and watch Tarkovsky films. I am very interesting. Though I am mostly inclined to mock my adolescent pretensions, I remember watching Tarkovsky’s Nostalghia back then and I am pretty sure I felt the same blissful drowsiness I described above. Though maybe I was just wallowing in my inflated sense of sophistication.

So what would the auteur, Sokurov, think if he were to see me lying there so peacefully? He would probably say something like, “What the hell! Where am I? How did I end up here in this unfamiliar sitting room with a strange man lying on the couch? I am freaking out! What is happening to me?” Turning to the television, he would then say, “Oh look! My film!!”

And I would just smile with half-closed eyes and reply, “Hi Alexander, nice to meet you, but I don’t feel like talking just now. Why not just lie on the floor and enjoy the rest of your film? You can shift the bike to make space. It folds up. Just stick the pin in it there. Yeah that’s grand, just put it in the corner. I’ll put it away later. Did you drive here? Oops… sorry, I’ll be quiet.”