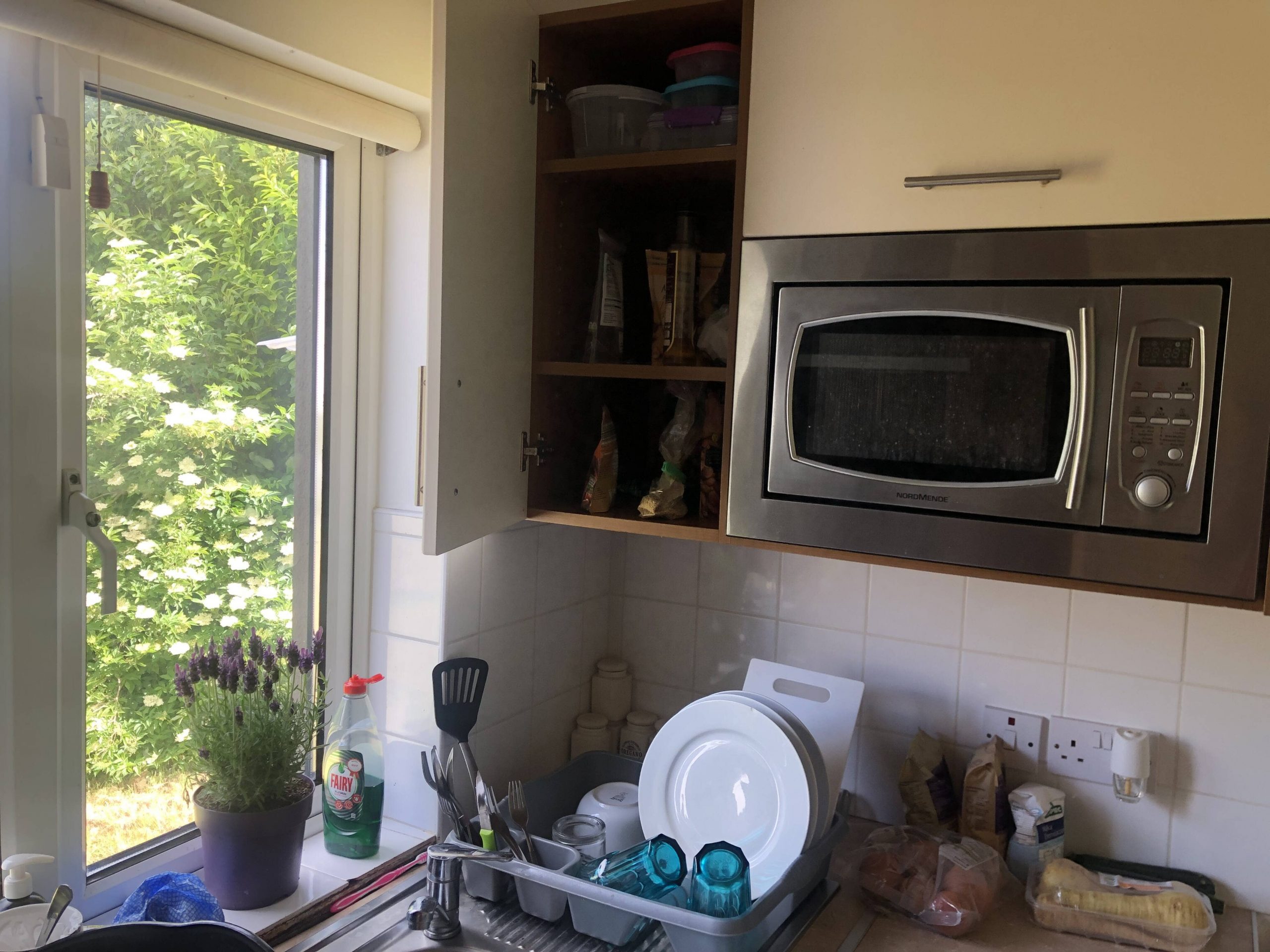 All the latest news from my kitchen.

KNIFE OF THE FUTURE

This knife (pictured) started life as your bog-standard, all-purpose kitchen knife with painted green handle. But all that is changing. A strange metamorphosis is occurring but this time it is not a man turning into an enlarged insect… it is a normal knife turning into a… I’ll explain in a bit. 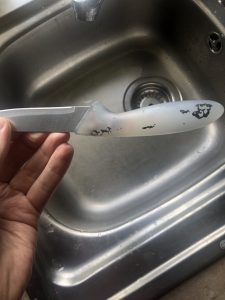 Hey there, space explorer! Chopping vegetables on Jupiter are we, heh, heh, heh!

First, a little background. I’m not sure where I bought this knife — Homestore & More maybe, among a set of 4, I’m pretty sure. This is the one I use the most because of its versatility. Good apple-pealer, carrot-chopper etc. I generally don’t peal apples unless I am putting them in porridge. That is not much of a background, John. And background to what, exactly? The knife, of course.

Okay, so, the nature of the metamorphosis. Well, it (the knife) remains all-purpose but the green paint is gradually crumbling away (because it’s the one I use the most and hands cause erosion). Big deal, you say. Well, take a look at it. The handle is beginning to take on an eerie, futuristic, creamy translucence, wouldn’t you say? Once all the paint has gone, it will easily pass for a knife they might have used on, say, Kubrick’s celebrated space film. And I bet it will still look futuristic in much the same the Discovery One will still look futuristic in the year 3040 and beyond. Eternal futuristicnessness.

It is basically becoming the coolest knife ever. Once the final fleck of paint falls away, it will be the coolest knife ever. Cooler than original MacGyver’s Swiss army knife, cooler even than the really big knife Mick Dundee used to scare away the headbanded hoodlums, deepening Linda Whatshername’s love for him and his breezy machismo. Sometimes I wish I were…

I don’t wish to artificially accelerate this metamorphosis; change should occur naturally. All in good time, as they say. I should not, for instance, scratch the knife handle as though it were a lottery ticket, as tempting as that might be. Maybe I could allow myself to scrub a little harder with the sponge when washing it up but, truth be told, one really ought not meddle in the course of nature. Besides, I sort of don’t believe in human intervention of any kind. We’re generally just kidding ourselves into believing we make a difference. A positive difference, I mean.

Well… no… wait… some human interventions do work. Ear-syringing for one. Probably some other medical interventions. Still, overall, best not to intervene. Is eating an intervention? That’s also recommended, if yes. We intervene in our own diets to become healthier, no? 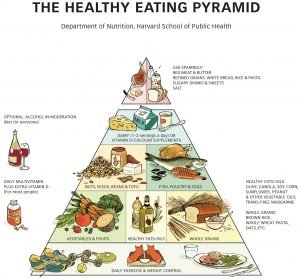 Then again, what if food is a myth? Or more specifically, food groups. Carbohydrates, protein, fats, grains etc. What if they’re all just made up? What if the only way food differs is in taste, colour, smell, shape, texture and mass and that, nutritionally speaking, every food is exactly the same? What if 500 grams of Burger Bites have the exact same benefits/harms to the human body as 500 grams of organic kale? Same degree of nutrition, weight gain and so on. What if what you eat doesn’t matter? What if the reason you feel poorly after a Romayo’s Dinner Box (one with especially unfresh, lamp-warmed seeming chicken) is because society has conditioned you to believe you should feel poorly and so you feel poorly. After all, where would be without fast food regret small talk? Near total silence is where.

I can already imagine the naysayers rolling their eyes, denouncing me and my “crackpot conspiracy theories.”

Sod them, I say. It may be a theory but it’s not a conspiracy one. I don’t believe “Big Food” are “conspiring” to cause harm by hiding from us the essential nature of food and how it is all basically identical in terms of nutrition. Their fancy food pyramids and grouping systems are entirely well-intentioned. The Utopian idealism of your typical food scientist may well blind them to reality, in any case. They are so sweet-natured and so determined to give the masses a sense of meaning/structure/purpose that they have even begun believing in the nonsense concepts of carbohydrates, proteins etc. themselves. Well, fuck ‘em, I say (yes, I’m moving from sodding to fucking), if you want to eat that Dinner Box for breakfast go right ahead (no chipper opens before 12pm you stupid fraud). It will not alter your life expectancy. Society kills, not food. Cool knife, though, no?

I just wrote/recorded a short demo called “Futuristic Knife” to mark the occasion.

You’re in my home

Now we await the final crumb of paint

The future could be any day

Lidl, in the spirit of corporate responsibility towards a dying planet, sell reusable glass bottles at their new orange juice making machines. You can choose plastic bottles too, if you’re selfish and want everyone to die of flood-suffocation in the near future. 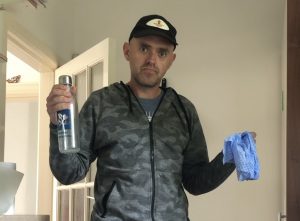 You will not pass this blind smell test.

That said, not much appears to have changed in these new Lidls apart from the orange juice machines. Small bit of product rearrangement is all. Maybe the lights are a tad more flattering (to people and products). Maybe the tiles and walls and stuff all feel a bit more… em… contemporary? I am not confident enough discussing general architecture/decor to give any further details. I’ll leave that to the experts (I am knowingly smiling and winking at a group of architects and interior designers right now).

I bought my own Lidl reusable glass orange juice bottle a while back. Sadly, after about 4 re-uses, it has taken on the stench of old J-cloth, a stench it now appears impossible to eliminate. I have tried baking soda, vigorous scrubbing with a toothbrush, the works — nothing works. I have not tried Milton which someone has recommended but I don’t care now as I have decided I am giving up on the glass bottle. I am going back to plastic. I will recycle, as always. Not just for the environment, mind, but also because I like the green bin in and of itself. It is a truly fine bin, always lovely and clean, unlike that hideous brown bin. Would you eat the contents of the brown bin for a billion pounds? A fascinating dilemma everyone should mull over for at least ten minutes a day.

In Lidl the other day, I intended to buy their home-brand (Formil) tricolour 3-in-1 pod things for washing machines (The things you stick directly in the drum rather than in the little drawer on top. They look like Wonka sweets). I prefer these pods to washing powder because the drawer and its never explained compartments fill me with doubt. 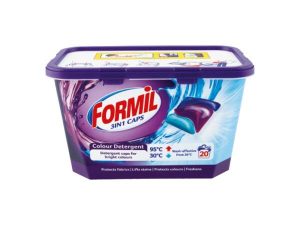 I love you and I want you.

Disaster! I somehow bought their monochrome pods by mistake. Purple only. Not 3-in-1. Just 1-in-1 — super-underwhelming! Lapse in concentration as Dennis Taylor might say.

I will now have to go without tricolour pods until I use up all the damn monochrome ones because I’m hardly going to throw them out or return them or not use them. I’m simply stuck with the bastards. I guess I could return them but I have no receipt and I’ve already used one. Though I can’t imagine Lidl making much of a fuss, either way. Maybe I will return them. I want my tricolour pods now!

Then again, perhaps I am overrating 3-in-1 pods. Will they make my clothes three times cleaner? I doubt it. Would I notice any difference? Probably not.

Take Aquafresh — three stripes of red, white, and blue —  does it make your teeth three times cleaner? Doubtful. I do like Aquafresh though. Loved the ads as a kid. Shame I only ever buy whatever toothpaste happens to be on special offer (rarely happens to be Aquafresh). Mind you, those ads I loved, where they claim each colour or stripe has a different function, strike me as total hogwash (mouthwash for pigs or maybe just shower gel).

3-in-1 washing machine pods state something similar on box, i.e. each colour has a specific function. More hogwash.

Otherwise, I think I may simply be blinded by my love of tricolours. I’m like the food scientists — well-meaning but full of crap.