Sometimes I think I might prefer to be someone else. Obviously this is a moot wish as if I were to truly be someone else, I would possess no knowledge of my previous self, and therefore be in no position to appreciate the change. If, in the event, I did possess knowledge of my previous self, I would feel uneasy and want to share my unease with an uncomprehending professional (Harold Ramis’s scene in Groundhog Day springs to mind). He would have little choice but to diagnose me with an acute personality disorder, my life thereby becoming more complex and challenging than it is now. But anyway, you get my point. 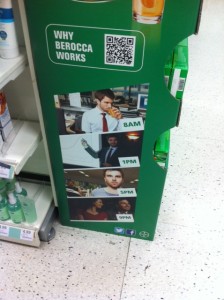 The feeling came over me the other day in Boots. I saw this ad for Berocca and thought I would like the life of the man in the ad. That is: Be up early; quaff a nice fizzy drink firm in the belief it will settle my stomach (it does settle my stomach and I don’t doubt its efficacy — in fact my stomach was never really unsettled, I just enjoy the taste and routine); understand and explain a graph to work colleagues who mostly like and respect me; have an intense workout in a state-of-the-art gym I can comfortably afford while listening to music I enjoy (imagine that — actually enjoying music again); spend the evening at the opera with a conventionally attractive woman (not sure how, why, or where I am getting opera from the bottom image. In fact, you probably can’t even see it… why am I even bothering?). Probably go on holidays and stuff too.

Anyway, there I was waiting for my prescription to be processed, struck by the sense I am missing out on a better life.

It happened again the other day aboard a bus travelling from Limerick to Dublin. I sat in front of two roughly sixty-something women who chatted continually and unselfconsciously about people and things. They were travelling to Dublin for the day. I envied their easy friendship and shared unfamiliarity with the city (they asked the bus driver where O’Connell Street was as they were stepping off). They were like two children about to set out on some exciting Blyton-penned adventure into the unknown. I wanted to be them.

I miss being unfamiliar with a place, the way I felt visiting Dublin as a child. That sense of entering a vast world of shiny, life-improving merchandise I’d heretofore only seen in the Argos catalogue my father brought home from England. I still get major nostalgia pangs for this precise feeling anytime I enter a large shopping centre or, to a lesser extent, department store. These pangs tend to be accompanied by a curiously pleasant, crushing sense of loss. This is probably why I enjoy shopping centres and, to a lesser extent, department stores. 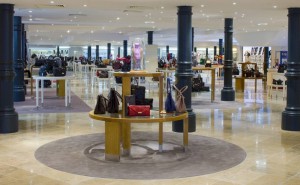 So anyway, I wanted to be these women, or one of them, accompanied by the other, just moseying about the vast plains of Arnotts, admiring clothes, considering the price of linen, buying a candle from the basement, having tea and a scone at the carvery. I/We/They are completely at peace in the sedate, impersonal atmosphere typical of large department stores. It’s the closest thing to being a happy child again, maybe. I would have followed them, sucked in their existence from a safe distance, but I had to be somewhere.

Later, I was walking though the grounds of Trinity College and saw a poster advertising a debate or lecture the title of which I can’t quite remember but went something like, “Is technology making us less happy?” The thought of humans gathering to consider a matter so pointlessly vague made me cry a bit inside. I imagined how agitated and empty I would feel were I to attend the debate alone, as I probably would, and how much nicer it would be to be a sixty something lady accompanying a dear old friend up an escalator to a large warm floor full of stuff.

This is an old demo of mine, “Shopping Centre”. The rules say song titles go in quotation marks in case you think I was wrong to do so.