The Beeped Becomes the Beeper 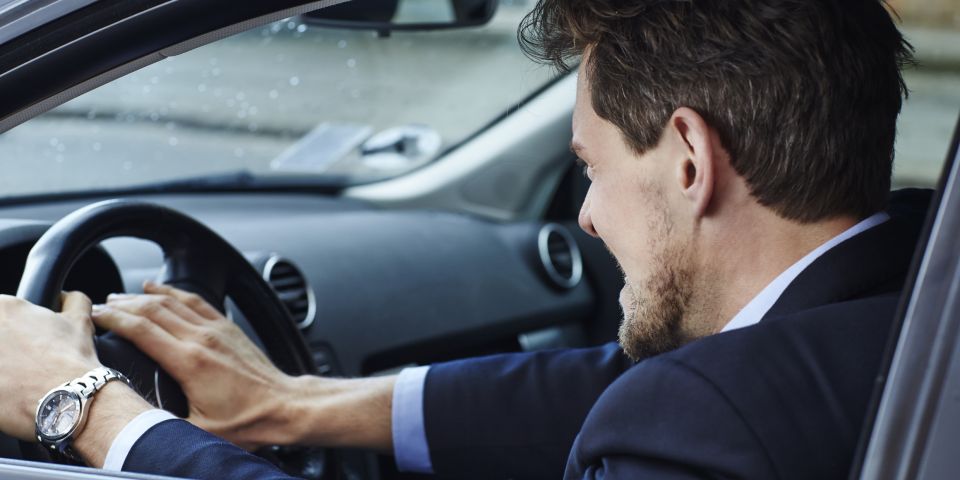 I’ve a job now as an SNA in a school in North Dublin. I drive to work most days. Negotiating early-morning city traffic is a very grown-up thing to do, by my standards.

The other morning, I beeped a man, a carefree drunk I believe, when he walked out in front of me as I was turning onto a busy street. He was right in my way but sent a wholly unapologetic “fuck you” gesture in my direction regardless.

Most people would say I was within my rights to beep the fella, but still, I felt bad. For had I just betrayed the union of reckless pedestrians? Had I, in other words, just betrayed my own people? Or worse — had I just joined the ranks of dicks who use car horns?

I am not afraid to admit that I, as a pedestrian, have been beeped several times in my life, my rampant jaywalking inflaming many a motorist (and the occasional cyclist). I may not respond to these beeps with unwarranted “fuck you” gestures, but I do possess my own patented brand of very weak apology: the nonchalant thumbs-up without eye contact. And, let’s face it, weak apologies are probably more annoying than completely unjustified rage.

As I said, I am an ardent jaywalker, helplessly so. I seem burdened with this restless desire to cross streets as quickly as possible, despite never being in an actual hurry to get anywhere. Well, no, wait, I take that back, I am frequently and regrettably late for things, so am often in a hurry. Being late or in a hurry is rarely, however, the cause of my jaywalking. I mostly jaywalk for no reason other than what I imagine to be some kind of deep-seated, primal urge, some internal game of mock derring-do. Why did the chicken cross the road? It just had to cross it, quickly and without delay, the slight thrill of comfortably evading oncoming cars (all of which could technically kill it, nevertheless) briefly lending its life a little meaning. Perhaps early video game designers captured this urge in the game “Freeway”.

So, I’ve just been playing “Freeway.” http://www.free80sarcade.com/2600_Freeway.php. It is faintly addictive. Actually, it gets boring fast. This stupid old game will never replace jaywalking.

Okay, where was I? Oh yes… how ironic then, this sudden role reversal: the beeped becoming the beeper. Perhaps this beep of mine signals some kind of slow, dismal descent into bourgeois respectability. Look at me, beeping all you bastards into line, beeping the lost, the lonely, the freaks, the meek, the weak, all of you pathetic carless dregs, I shall beep away your dignity, your right to live freely, you, a pedestrian acting with glorious abandon, taking a chance, yes, you’re going to cross this busy street, right here, right now, just walk, don’t look, no need to look, man is greater than machine, you can do this, you are invincible. But no. I yank you from your fantasy, I honk you back to earth — and all from the comfort of my goddamn ivory car.

God I feel so dirty. I mean my whole life, I have stood firmly against the use of car horns. A horn was to be used only in life or death situations, if even for that. Once, at home, I was painting a wooden fence by the road and my sister drove past and beeped what she thought was a friendly beep. I had to literally tell her later on to never do that again. I had my back to her when she beeped so at best all she was going to do was give me a fright. There I am, painting serenely, all mellow like, when suddenly I’m greeted by this sharp, shrill fucking “bip bip” — the most obnoxious sound of them all, a sound that makes the sound of other people eating seem like a Mozart mass in comparison.

How now can I preach zero tolerance of car horn use when I myself am guilty of the act I so condemn? I guess I have crossed the Rubicon, I am a beeper now, well on my way becoming this smug, stuffy prick whose letter I just found by googling “reckless pedestrians.” https://www.irishtimes.com/opinion/letters/reckless-pedestrians-1.1008938. Perhaps I am losing the run of myself here. I know the letter writer makes a fair point. Be careful out there, respect others, be a good, responsible citizen!

One last thing: I have come to resent those who press the pedestrian crossing light button on relatively unbusy roads. You don’t need the green man. Just wait five seconds for a gap in the traffic. You know my light is red now because of you. You’re making me late and I’m already late. I hope you’re happy. Honestly, I hope you are a reasonably happy person despite this being an easily solvable issue, on your part. How’s that for generosity and good will, on my part.